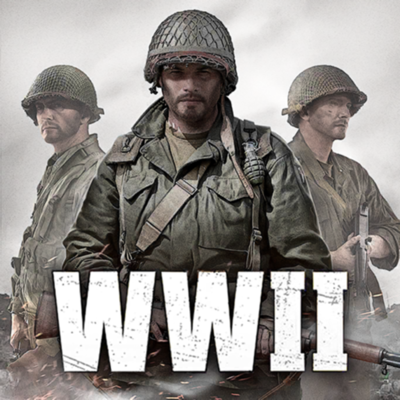 Fight soldiers from all over the world in the best World War II online shooter for iOS! This game will take you to World War II battlefields, where you’ll able to use military vehicles to conduct battles. There are several modes in the game, here are the few: - Deathmatch – intense battle where everyone fights for themselves; - Team deathmatch – Two teams fight for domination until the timer ends; - Capture the flag – you should capture the enemies' flag and bring it to your base. But be careful, don't let the enemy capture your flag; - Custom games – Create your own game modes and invite your friends to play; Battle with military vehicles and numerous weapons, from pistols to machine guns and shotguns. Features: - 12 legendary World War II battlefields! - 4 types of vehicles from different countries: the USA, Russia, Japan, and Germany! - 6 game modes and a custom mode with your own rules! - 100 unique weapon types: pistols, assault rifles, machine guns, shotguns and many more! ======================== Follow us on VKontakte: https://vk.com/worldwarheroes Follow us on Facebook: https://www.facebook.com/WorldWarHeroesOnline/ Subscribe to our YouTube channel: https://www.youtube.com/channel/UChMfgo6g8ri0FaAR-SpYpXw

So far I have played many mobile games and they were all really good. But when I started playing this, I was blown away. Nothing I had played was better than this. There are some things I would like to see in later updates if possible. A lot of the original maps were amazing and were fun to play on, but with the new updates, they have disappeared. I would like to see the old maps and maybe some new ones. Also, I think there should be more vehicles for the players to control. Maybe a Jeep that two people could ride in and one person could shoot out of the vehicle. There should also be more modes to play like capture the flag or capture the point. When I play this game it reminds me of Call of Duty WW2. One of their modes is where the allies have objectives to complete and the axis has to stop them from completing it. After one objective is done, it goes on to another objective and the map advances. If possible that would be a good addition to the game. Also I think you should be able to pick up ammo and grenades from dead enemies. I can’t think of anything else so I guess that’s it. Anyways I love the game and thanks to The developers for making it.

So the game is pretty fun and is base around skill level I feel like the game could use a bit more of animation to the characters, and also make the characters move a bit faster since I feel like the game is very slow and not as expansive as all the other games you’ve made. All in all I think the game could use a bit more animation and quality, one other thing forgot to mention is that you should do two things, first is have two different types of mode(ranked/casual) this would give people a lot more to choose rather then going into a game with people who really vary and I think this idea “if implanted” would really help people try and get a good grip on the bases with the tutorial. The other think I wanted to add with this is the guns I looked at the most recent post on how the game is well, ok, she says the game would be better if the skill level idea was just fixed a bit so players like me wouldn’t just jump into a game with 3 rookies who don’t even know what’s going on, and 2 pros who will do everything to kill you. One other thing that should be said is the guns do fix them they feel like rubber bullets because the enemy’s body most of the time will pretty hard to kill since it takes two to four mags just to kill one guy. But if this is read by the maker of this game please do listen and don’t give us any junk that just makes us the players more of a reason to delete this game. From infinity Xi

I bought 7000 credits for $5.99 but I still didn’t get my credits and I emailed the game and I told them my account ID number and they haven’t responded to me or even given me my credits and this has happened before but I decided not to email about it but this time I did email since it was $5.99 that I paid that was from a gift card I was given as a gift and I still haven’t got my 7000 credits or a response but other than that I love the game besides some of the prices for things and how some guns you can only get by paying real money but if the prices for things were not so expensive and if some guns didn’t cost real money and if I would receive what I pay for with my money than I would most definitely rate this game 5 stars because I love it and I have tried out other shooting games even ones that are rated almost 5 stars and I end up deleting them because clearly the people that have rated those games haven’t played this game because this is my favorite out of all of the shooting games on the App Store and one other thing is that I don’t like how sometimes when you use a upgrade point it doesn’t always upgrade the gun and I do miss the train map but the game is still a great awesome game that is worthy of 5 stars if those things can be fixed

I absolutely loved this game when I started playing, and 31 levels later, deleted it. They've increased the stats of legendary gear and altered spawn times to just a few seconds, two mistakes that closed the coffin on it permanently for me. Aside from it being tremendously tilted towards paying players, I've had enemies spawn literally behind me right after I kill them, removing the small timeframe that used to allow players to heal up and (at least) reload before another encounter. In fact, I've spawned behind enemies with my crosshairs literally on them. These issues have always existed, but are now exacerbated by reduced respawn times. Overall an absolutely great game mechanically, but a stressful and frustrating experience. Losing to people unfairly and not standing a chance to a +20 legendary gun on a guy with double your health and armor, with half of your KDR isn't level gameplay. The game feels like the devs put thought into it, but never really tested the applied changes before tossing it on their player base. I understand these games are produced to generate revenue, and don't mind a few weapons that are worth paying for, however, these players should be given an edge and not an insane advantage that renders other non-paying players efforts useless. I hope they implement new changes to the game and make things more even with longer spawn times or new zones away from enemy players.

Try focusing on sprinting and graphics and also tank physics like for example the tiger should have the same armor thickness in real life and the Russian t-34 shells should bounce off like in reality and make the tiger slow but well armor and make the Russian t-34 more maneuverable and same with the American m4 Sherman as for the weapons the reloading speed should be a little faster for LMGs and for rifles and For grenades should no explode on contact they should take 5 seconds to explode and for bullet penatration depending on the caliber/tank shell it should pierce threw thin walls and metal same for shells and for armor the helmet should be resistant against pistol rounds and for rife (depending on the power) should take 2-3 rounds to damage and also there should be anti tank rifle on each nation it should act like a normal rife except that it can damage thin tank armor and some things you should add are bigger maps and modes such as capture the flag and free for all and a complete war mode were there are 30 vs 30 people and for the soldiers models make more of them with different uniforms that’s all I have to say if you can make it happen i will give you guys more ideas if you make mine happen that’s all I have to say.

World War Heroes: WW2 FPS PVP was released in the App Store. It is developed by Azur Interactive Games Limited, who have also released the following apps.