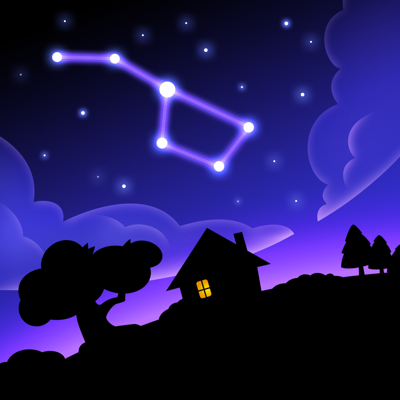 SkyView® brings stargazing to everyone. Simply point your iPhone, iPad, or iPod at the sky to identify stars, constellations, planets, satellites, and more! Over 3.2 million downloads. App Store Rewind 2011 -- Best Education App “If you've ever wanted to know what you're looking at in the night sky, this app is the perfect stargazer's companion.” – CNET "If you’ve ever been looking for a stargazing app for your iPhone, then this [is] definitely the one to get." – AppAdvice “SkyView is an Augmented Reality app that lets you see just what delights the sky has to offer.” – 148Apps Editor’s Choice You don't need to be an astronomer to find stars or constellations in the sky, just open SkyView® and let it guide you to their location and identify them. SkyView® is a beautiful and intuitive stargazing app that uses your camera to precisely spot and identify celestial objects in sky, day or night. Find all 88 constellations as they fade in and out while you scan across the sky, locate every planet in our solar system, discover distant galaxies, and witness satellite fly-bys. Features: • Simple: Point your device at the sky to identify galaxies, stars, constellations, planets, and satellites (including the ISS and Hubble) passing overhead at your location. • Sighting Events: schedule alerts for upcoming celestial events. • Apple Watch: see what objects are visible tonight and how to spot them using your Apple Watch. • Today Widget: brand new iOS 8 today widget lets you quickly see upcoming celestial events. • Night Mode: Preserve your night vision with red or green night mode filters. • Augmented Reality (AR): Use your camera to spot objects in the sky, day or night. • Sky Paths: Follow the sky track for any object to see it’s exact location in the sky on any date and time. • Comprehensive: Includes thousands of stars, planets, and satellites with thousands of interesting facts. • Time Travel: Jump to the future or the past and see the sky on different dates and times. • Social: Capture and share beautiful images with friends and family on social networks. • Mobile: WiFi is NOT required (does not require a data signal or GPS to function). Take it camping, boating, or even flying! What a fun way to teach yourself, your children, your students, or your friends about our wonderful universe!

Fun and educational. I love the fact that the planets show rotation. I'd love to see the developers consider updating in the future, the ability to tap into deeper space. Perhaps allowing us the chance to see the moons around planets, and any other space objects that are known in real time. One issue I find is the planets are askew/slightly off, causing me to adjust an approximate only to the L&R, which still doesn't give a true correction (or onion skin) It'd also be nice to have more educational factoids/info updated. This alone shouldn't deter you from getting this app, as its really the best one out there for those of us who love learning astronomy. I do love this app! I hope the programmers/developers consider our feedback & wishes. Every time Its clear outside regardless of the weather, I open this app and learn something new! Four Years later and everything I asked for and more! Next Generation-I'd love to see a wayback option gps enabled where ever you are on the planet and the ability to go back in time to get the options to see the sky in the past (with known historical proven factual astronomical phenomena) that'd be a wonderful challenge for developers and experience for those of us who wish to see the Sky as it was in roman times!

I’m writing this review just because of how amazing this app is. I’m a kid who loves Astronomy, and takes it to long lengths. Just this Christmas, I got my first telescope! The Celestron 114 az Explorascope! I downloaded this app originally to see where my favorite star, Capella was located. Turns out, it had spot on location. I then got the full version, and have been using it on a weekly basis! This is an amazing app, and I look forward to using it for studying nebulas, planets, etc! I love this app mainly because I have been studying astronomy for about 5 years now, and have gone from knowing the basic 8 planets, to knowing the official names for several stars, galaxies, nebulae, and several other celestial bodies. This app is awesome for star gazing, planet watching, and exoplanet tracking! If you need a trustworthy, stable, easy to use app, download this for sure! My favorite part about this app is the mini lessons it gives you whenever you tap on a star, planet, nebula, star cluster, galaxy, you name it! I’m never downloading any other astronomy app! Thanks a bunch!! :)

I initially tried the SkyView Lite with my son after buying him a telescope a few weeks back. My initial thoughts of the app were great (still is) as you can point up, down, side-to-side and behind you and find what’s out there. This gets me dizzy and somewhat lost when trying relocate the object through the telescope. A few nights back, we went to a viewing event and found another similar app (stellarium) which did not have (could be user settings) all of the constellation artwork pop ups and things getting in the way to try and find certain nebula and various other objects. His app simplified with a real-time view (potentially used a light pollution map) of what’s visible by the eye, to help find objects. He also did not have to point the app up, he held it at ground level and was able to match the stars visible currently to the eye, vs holding up the phone and getting lost within all the stars in the sky with your app. Long story short I found some settings in this app to remove the pop up constellation artwork and reduce some of the stars, planets and satellites, however I’m not able to eliminate the point up to see option. Is there a setting for that in this app? I would like to hold the phone flat like I’m texting and see a real time view of what’s viewable with my eye, vs getting dizzy with the moving and spinning of the app.

I really fell in love with SkyView. It makes it so easy to learn about what I'm looking at in the night sky. There's one thing I think could make the app even better: Currently the only way to look at a specific object in the sky through the app is to point and orient your device so it is facing that object, like the camera. But sometimes I would like to search around the sky without waving my phone in crazy directions, like if I'm lying in bed and want to pan over to what's under the horizon. I think it would be great to add a feature that lets you pan across the sky without needing to move your phone, so it is not oriented by the gyroscope. The view can stay at a constant zoom level, but being able to learn the stars without having to always point in that direction would be tremendously more convenient. This could be an option that you can switch on or off to keep the integrity of the original application as well. Please consider. Thanks for a wonderful contribution to the world!

It seems that it is mandatory to see the app with augmented reality on. I try to shut it off go back to the app and it automatically turns itself back on. That’s annoying, I love the app and want to give it a five star rating but the settings won’t let me because it’s not just the augmented reality. there’s a couple of other settings that no matter how many times you shut them off they go back to being on. I paid for the app I downloaded the app you give us the options to have it on or off and yet we don’t get to utilize those options it seems forced upon us. And also can you bring the gyroscope back to align the app the way you have it now doesn’t always work easily. If it’s not broken then don’t fix it. I really do love the app I think it’s amazing but if you could do those two things; I would appreciate it. Then somebody else mentioned about searching the surroundings without moving the phone that’s a fabulous idea

SkyView® is ranking in   Education & Entertainment

SkyView® was released in the App Store. It is developed by Terminal Eleven LLC, who have also released the following apps.