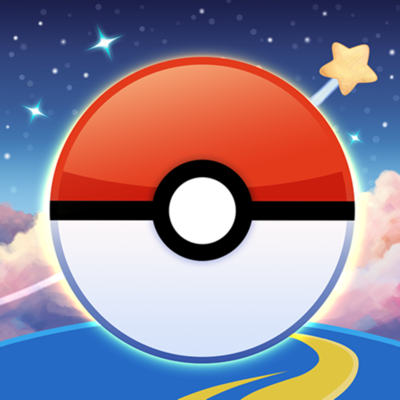 NEW! Now you can battle other Pokémon GO trainers online! Try the GO Battle League today. Join Trainers across the globe who are discovering Pokémon as they explore the world around them. Pokémon GO is the global gaming sensation that has been downloaded over 1 billion times and named “Best Mobile Game” by the Game Developers Choice Awards and “Best App of the Year” by TechCrunch. _______________ UNCOVER THE WORLD OF POKÉMON: Explore and discover Pokémon wherever you are! CATCH more Pokémon to complete your Pokédex! JOURNEY alongside your Buddy Pokémon to help make your Pokémon stronger and earn rewards! COMPETE in epic Gym battles and... TEAM UP and UNITE with other Trainers to catch powerful Pokémon during Raid Battles! It’s time to get moving—your real-life adventures await! Let’s GO! _______________ With the player’s permission, Adventure Sync uses the Health app to enable the player to earn walking distance when the app is closed. Notes: - This app is free-to-play and offers in-game purchases. It is optimized for smartphones, not tablets. - It is recommended to play while connected to a network in order to obtain accurate location information. - Compatibility is not guaranteed for devices without GPS capabilities or devices that are connected only to Wi-Fi networks. - Compatibility information may be changed at any time. - Information current as of July 11, 2019. - Compatible with iPhone® 5s / SE / 6 / 6s / 6 Plus / 6s Plus / 7 / 7 Plus / 8 / 8 Plus / X devices with iOS Version 9 or later installed. - Not compatible with 5th generation iPod Touch devices or iPhone 5c or earlier iPhone devices. - Please visit PokemonGO.com for additional compatibility information. - Compatibility is not guaranteed for all devices. - Continued use of GPS running in the background can dramatically reduce battery life.

Seems some homework was done on how to build addictive entertainment. Every week I’m surprised at the age group range I see at raid hour in town, everything from 6 to 85 in wheelchairs and all forms in between. Have seen as many as around 200 people on community day flooding the sidewalks and nearly getting ran over.... never said they were all smart and mindful. But I can’t quite give it 5stars :/ Some things I could complain about, are actually what aids in keeping you playing, so I won’t on those things.. However, Shadow Pokémon are a more real issue.. They look cool, but you have to give up the looks to make them useful and that stinks! Collectors are getting gouged on them as you need to significantly increase your room to store them, at some $$ or large amounts of time. They don’t have an entry in the Pokédex so you either have to keep them to see again, destroy them by purification or transferring them into nothingness.... Is there really no room in your worlds design for the classic shadow/evil/underworld style classifications that been the main stay of gaming for decades?? Let us make them usable via TM’s and just drop the skill reset on purification, or work harder and give them a new move set category with maybe a smaller skill set pool if it makes it easier.. and the way your trading system destroys IV’s on trade I don’t even see any harm in letting us trade them....

I’m gonna keep this short and sweet I’ve recently picked up Pokémon go again after about 7 months of not playing this game I once was obsessed with now I can say that it definitely has grown in a lot of ways but still things need to be changed starting with people in rural areas have a tough time really playing this game because of the lack of poke stops and variety of Pokémon given to them. I myself live in the Suburbs and also once lived in the city and FYI it’s such a drastic difference in terms of pokestops and Pokemon in general the cities are obviously flooded with both while the suburbs yet not completely empty still lacks the ability to grow within this game, but back to my point I have friends who love this game who live in much more rural areas and they just can’t really grow or have much fun with this wonderful game and they become extremely frustrated with it because they really must travel such a distance to be able to play this game it was obviously meant to be played with gym battles galore, pokestop madness and obviously new Pokédex entries. So I conclude this with Niantic you guys have really made this game fun again but please show more of a distribution of Pokémon, gyms, and pokestops to all your players across the country because I want this game to do better then it has ever been. P.s. sorry for the lack of punctuation

I love all of the new editions to the game. I love that it finally FEELS like pokemon. The problem is that it’s far too late. The fact that you guys were so eager to release this game before it was finished, before you had the server capacity (that’s not totally your fault though this game initially blew up more than anyone could have thought), there was no features to battle, interact with friends, no raids or gym battles, the radar had constant problems, you guys wouldn’t allow anyone to use radars because your guys’ app kind of sucked at the time. You guys just handled this game extremely poorly during the initial first 6 months. Instead of releasing the game unfinished to make money, why didn’t you at least add features that would have made it fun to play with friends? Yes the raids were a great edition, but the new problem is that there are so many players that quit that I can never catch any legendaries because none of my friends and no people are out actively playing the game anymore. This game would have actually been fun to play and probably would have kept more players if it even had just some of the features that it does now. But because it doesn’t, it’s simply too difficult to do some of the really awesome things unless you have a dedicated group of like 15 people who will go out together and do raids. And I don’t know anyone who does. Nice try niantic, hopefully the Harry Potter game is better handled.

I’m not even going to lie, I’m 27 and absolutely love this game. I grew up with Pokémon and this is by far the best Pokémon game. I stopped playing for a year or so because I reached the top level and got bored with it; about 6 months ago my husband convinced me to redownload it because of the numerous new features and two more generations of Pokémon that had been added to the game. Unfortunately as of lately I’ve been having nothing but problems with getting it to load. This is now the third time in a week that I’ve had to uninstall and reinstall the game and unfortunately this time it doesn’t appear to even be reinstalling. And yes the app and phone software are all up to date and everything like that. On top of that, on my other phone, if/when the game loads it no longer loads all of the way. It’s genuinely one of the most frustrating things I’ve been dealing with because playing this game keeps me out of trouble and out of my own head. It’s definitely become my biggest hobby and biggest outlet, so when I’m stressed out to the max and it doesn’t want to load - which seems to be every single time I’m excessively stressed lately- it just makes everything worse. I was praying that these last batch of updates they did would have fixed that but I haven’t even been able to get the game to load since it updated! That is literally the only downside to it and unfortunately it’s a major one.

I got through the bad things about this app (Making an account took forever and I got stuck on loading) I have enjoyed the good stuff. I am on a roadtrip and as such I have been able to sit down, relax, then get exercising because the game has plenty of Poké Stops in cities, suburban areas have schools as Poké Stops sometimes, and basically, as long as you are near a Poké Stop you can enjoy this app to the fullest. Partly Cloudy weather has lead to me being able to catch so many different Pokémon and within a few minutes of playing I caught an Eevee and I love my Water Pokemon that I caught so far (Water is my favorite type) and I have enjoyed being able to play this game that has encouraged me to Pokémon GO outside and get exercise! At first the app seems blank, sure, but then you walk around and find a group of Plusle, Minun, Geodude, and so many more. And thankfully catching one doesn’t scare all the others away. I haven’t caught Pikachu, one of my favorite Pokémon, but on this road-trip I feel like I am destined to find one. I don’t care if I have to walk around the campground until 10:00 At Night. I will do what all my years of playing Pokémon has taught me. I will tell myself this everytime I feel tired and there is a nearby Poké Stop. Gotta Catch ‘em All! But seriously. Don’t put yourself in danger playing this app. Even if that shiny Magikarp (The King of Carp!) is right there. Don’t drown for it.

Pokémon GO was released in the App Store. It is developed by Niantic, Inc., who have also released the following apps.