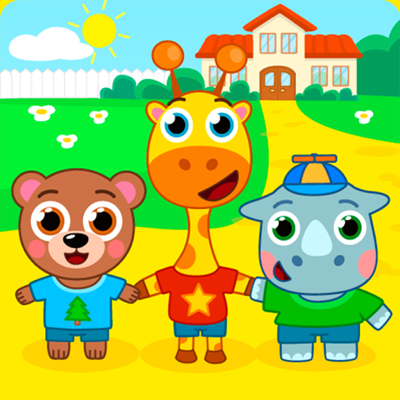 For training the child for kindergarten, we advise you and your child to play "Kindergarten" on the tablet or Smartphone. In this game it will be necessary to look after kids and to satisfy all their requirements so that they won't cry: to feed, to play with them, to dress up, to put them to bed, etc. It turns out that fussing with kids that the game Kindergarten offers is very fascinating and educating. Children can imagine what's waiting for them in a kindergarten, playing such games for young. Many of the children who already visit kindergarten don't want to part with it even at home, and here our game will help. This fascinating occupation belongs to the category of educational games for kids as it promotes development of imagination and creative talents of the child. The interface offered in the application of the game for little boys or little girls is simple and it doesn't need skills of reading to play it. To begin playing with kids, it is necessary to download and start the game. Then your child will plunge into exciting world of adventures in kindergarten. Conditions of the game for children "Kindergarten" are so that even kids under three can deal with it. During the game process there constantly appear hints for children so that kids play it with no problems or questions. Each stage of the game displays processes which happen in kindergarten. The child will be able to see how children spend time in kindergarten together, on the example of animals' kids. The initial stages of the game about the kindergarten. At the initial stage of the game for kids the tutor will have to meet all children, to seat them on certain chairs and to dress in the bibs which are specially intended for everyone (all of them different). The task of the player is to dress all in the bibs. At the following stage of the game for girls and for boys there will appear food on the table separately for each kid. It needs to be given correctly so that everyone on a plate had about 2-3 dishes. If the child ate all, then he will show very clearly that wishes to go to sleep. When the heroes of the games for kindergarten children are near the beds, the tutor will have to put them to bed and cover each with a blanket which settles down near their legs. If eyes of all children are in a half-closed state, then in this moment the game about kids provides a hint on the lamp that it is necessary to turn off the light. After that all will sleep very tight. Features of the game Kindergarten. These games for kids have conditions which allow to carry out a large number of the most various fascinating actions: to draw, to play with robots, planes, machines, to jump through a rope, to start up soap bubbles, etc. Generally, in the course of this game for kid to your child it will be very cheerful and he won't have time to miss. What the advantage of the game Kindergarten consists in? These childish games for the little ones allow your child to get invaluable experience about how properly take care for younger children. Also he will be able to learn what is waiting for him in such educational institution as kindergarten, so it’s one of the learning games. These educational games are developing and they differ in the fact that possess very bright graphics and provide enough nice characters. Besides, these games for small children also attract great interest not only of girls or boys, but also of their parents. They will be able to put themselves to the place of tutors and will understand that their work is not easy as it can initially seem. Adults should play children’s games for kids at least to understand the importance of work of tutors and teachers.

Kindergarten. is ranking in   Games & Family

Kindergarten. have a 2a user reviews.

Kindergarten. was released in the App Store. It is developed by YovoGames, who have also released the following apps.