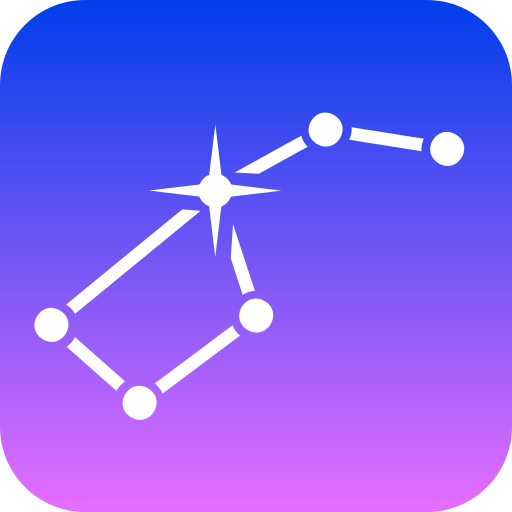 Star Walk is the most beautiful stargazing app you’ve ever seen on a mobile device. It will become your go-to interactive star chart of the night sky, following your every movement in real time and allowing you to explore over 200, 000 celestial bodies with extensive information about stars, planets, satellites, and constellations that you find. Even if you’ve never been that into astronomy, Star Walk will surprise you. Get started quickly. Launch the app and point your device at the night sky, you'll see the stars, planets, satellites, and constellations in their proper place for your location. As you move your device, the star map updates in real time. The Moon is the easiest first target. Use Night Mode to go easy on your eyes and preserve night vision when exploring the Universe.Go deeper and beyond. Every star, planet, constellation, or deep space object, such as nebulae and galaxies, has an (i) next to its name. Tap it to access information.A scale on right is the Time Machine, slide it to explore the map of the night sky of tomorrow or years ago. StarWalk has data on over 9000 man-made satellites. Track their flight across the sky, be it day or night, catch iridium flares. Meteor showers are spectacular yearly events. Star Walk can help you plan ahead and locate the meteor shower on the night sky. Share your experience. Post pictures from your virtual planetarium and let your friends learn about the night sky. Astronomy has never been so engaging!

Star Walk is ranking in   Education

To see all other keys and revenue click here B00HZPDB3G

Star Walk have a 289a user reviews.

Star Walk was released in the ​Google Play Store. It is developed by Vito Technology, who have also released the following apps.